Thursday’s daylight run from Coolgardie into Perth was largely uneventful with two cleanable trial stages and the Narrogin Special Stage, which like all the special stages, was mostly to cater for spectators. However the Cortina's were showing signs of trouble despite Bond holding the lead into Perth.

This trial stage from just outside Coolgardie to east of Lake King was quite varied but easily cleanable, mostly because the first half of the stage was on super fast mostly straight gravel roads through undulating scrub country. However dust was a major hazard especially with cutting-and-running cars being allowed in front of some of the cars who had done the entire route to that point. The second half became more interesting with narrower sandy tracks, a few tight sections that were quite rough with roots and ruts, finishing on a better quality road. It supposedly passed by "Hatter Hill". Some of the last 95 km was used for the Marvel Loch to Lake King section of the 1968 London-to-Sydney Marathon, but in the intervening 11 years the road south from Forrestania had been substantially upgraded. 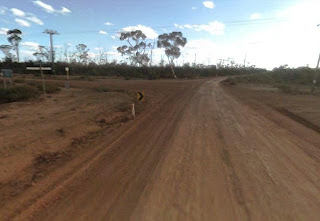 The stage was cleaned by 28 cars (Herrmann, Cowan, Mehta, Bond, Brock, Dunkerton, Barth, Carr, Mizel, Fury, Ferguson, Portman, Davis, Jensen, Murray, Johnson, Rowney, Loader, Miettunen, McCubbin, Beveridge, Foden, Roberts, Mason, Myers, Hurrey, Neilson and Donoghue). Some of those now in the "missed no controls" group dropped time including Watson 3, Jackson, Lund and Nalder 4 each, Warmbold 5, Hilton 9 and Stewart 26. This may have been due to dust, as was the case with Nalder who broke a tie rod in dust behind Jensen's Volvo. A total of 55 cars completed the stage with Caudle dropping more than 3 hours.

This transport across good sealed roads to near Kukerin allowed time for refuelling at Newdegate. It was a fine sunny day and the road indeed had very few bends!
The transport was not that tight unless you dawdled in Newdegate which was easy given the temptation to buy icecreams. Nonetheless, Watson dropped a minute and the trial leader, Bond, dropped 4 minutes presumably needing to work on the front end of the ailing Cortina. Others to drop time were Mizel and Mason (4 minutes each) and Jackson (9 minutes) who seemed to be having problems with their Commodore that would slow them all the way into Perth. Further back Lockhart lost more than one and a half hours but persevered completing all the stages into Perth.

There was little point to this jaunt around the WA wheat fields north of Wagin. The roads were mostly straight and good quality. Pretty much everyone was early, although Maloney had problems with the P76 and was 17 minutes late after having skipped the previous trial stage.

This was a short run up the Great Southern Highway almost into Narrogin and to the start of the Narrogin Special Stage. The first half of the special stage ran beside the highway so you could see other cars coming towards you!

This was quite an enjoyable stage, down one side of the railway line for 13 km and back up the other side. The railway access tracks were of a reasonable surface and meander through the scrub with a few sharp dips and yumps. 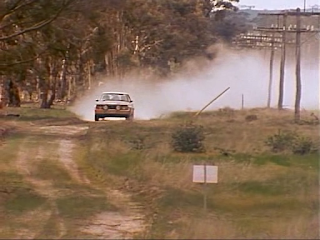 Bond on the Narrogin Special Stage

The two lead Cortinas were continuing to be slowed by front suspension problems with Bond slightly off the pace and Carr dropping over 10 minutes after a bolt had fallen out of the front suspension. Davis had a puncture on the 180B at the start line so had to change it "in the stage". Jackson also had problems with the Commodore dropping 46 minutes. The Warmbold Audi apparently broke the suspension and dropped a maximum penalty but still limped into Perth without any controls missed.
About 70 cars completed the stage. Times perhaps reflected more who was foolish enough to press hard on a stage that meant so little:

The run into Perth had adequate time allowed, unlike the end of the previous division into Adelaide. A few crews lost time on the way into Perth, presumably as a result of car problems, although fatigue was also a possible factor. Herrmann dropped 7 and the Jackson Commodore was obviously carrying a problem dropping 41 minutes. The impound was at the Gloucester Park trotting track where the first car arrived around 5 pm as daylight was starting to fade. The first car would be due out of impound on Friday morning at 3 am, so after dinner and cleaning up, even the leading crews only got about 6 hours sleep. Given the unscheduled "hold" at Immarna, it's difficult to determine when the last car would have arrived on the edge of their late time, but it was likely well after midnight, and may have even been after the first car departed next morning! The back-markers probably only got a couple of hours break and perhaps no sleep at all.

Next: Back to Division S Summary

It was 10.06 am as we headed off into the Mad Hatters Trial Stage with me driving. Strangely, despite our arduous night on the Nullarbor, daylight brings a freshness and we felt OK. With the lack of time at the start we hadn’t check which cars were in front of us or what position we were on the road but it soon became apparent that some cutting and running cars were ahead of us on the stage. By 100 km I was in someone’s dust and despite a reasonable breeze we just couldn’t get close enough until the T-Junction at 135 km where we could see it was Jensen’s Volvo who must have skipped the Rawlinna section. A bit further on the road did a sudden right turn and we BOTH went straight ahead onto a minor track. Now I was right behind him almost touching his bumper and he STILL wouldn’t let us past. He later claimed he couldn’t see us – BULLSHIT! So we decided to drop back as we were almost certainly all going to be early on this one.
At about 200 km we were on a somewhat narrower track with the occasional washaway when there was a sudden thick cloud of dust, obviously because of a hazard and the car(s) in front braking. We braked but I hit the washaway, broke the right hand tie-rod and speared off the road into a small sapling. Shit! There was no damage other than the tie rod which took 15 minutes to change. Amazingly, no-one went past until we were almost finished then a convoy of four cars, headed by Mizel who was slow, Max Roberts’ Commodore, an unidentified 180B (maybe Car 60?) and the Jackson Commodore. Shit again! It looked like we would now lose time on a cleanable stage because we would have trouble getting past these cars that were due later than us. Soon after though, Mizel let everyone past and things started to move a bit quicker. Then we entered a sandy track with much less dust and I got past Jackson OK. Then we got up behind the 180B and pushed hard but he wouldn’t let us through. At the end of a long straight he more or less lost it in front of us and slid off the road backwards so we got past OK. On a really grotty track with lots of roots Jackson came up behind us and he was pushing hard so we let him past but soon after he stopped having punctured on a hidden stump. Only Max Roberts remained in our way and we caught him on a narrow but smooth sandy track but it was so narrow he couldn’t really let us past but did so when we emerged onto the good road 15 km from the end. We were relieved to only lose 4 minutes on a stage where we should have been half an hour early!
Wes drove the transport over through Newdegate where we stopped for ice-creams. We found our service crew coming the other way on this stage – they had been heading from the Lake King control but were running a tad late. Geoff tried to have a sleep while I navigated Wes around the pointless stage through the wheat fields and up to the Narrogin Special where Geoff navigated and Wes drove – good fun but basically pointless also.
The run into Perth was uneventful but it was pretty much dark by the time we refuelled in Narrogin. We discussed our position during the transport and while we felt disappointed with the loss of almost three and a half hours on those two horrendous Nullarbor stages, we figured that almost no-one would have passed us in the results except for Cowan and Fury, and quite a few cars would have dropped out, missed controls or had big time losses, so our overall position should be OK. In fact we did not get results until we awoke around 2 am when it was confirmed that we were thirteenth, behind Rowney and Mason. In fact only two cars that were still behind us overall(Loader and Davis)had beaten us on the division, so we’d been fifteenth on the division. It was still incredible to see that Bond and Ferguson had dropped less than an hour on the division when we had lost almost 5 hours!