From the winning car

Two weeks in the death seat 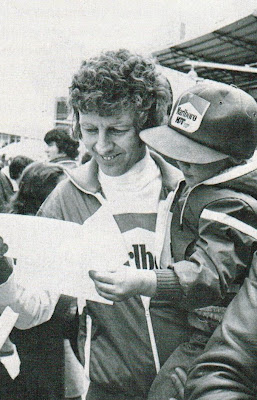 Noel Richards with son Simon at the finish of the Repco
(Photo appeared in An old dog for a hard road, but was mislabelled)

It is before midnight in outback South Australia. The track heading from Marree to Coober Pedy is fast, narrow and intermittently covered with large areas of water from recent rains. We have been arriving at these stretches of water at high speed, braking hard and steering the rally Commodore around countless side tracks. The track also undulates so often we would arrive over a crest to discover the track swinging left or right. Quite suddenly we get caught out going too quick and the Commodore flicks up at the rear and tries to bury its nose into the track ahead; quick reactions by the driver and an ounce of good fortune has us off the track in the scrub but undamaged. We lost no time near William Creek that night but had learnt a big lesson.

This is the life of a rally crew on the two weeks 1979 Repco Round Australia Trial. Not since the Redex trials of the 50s has there been such an event. A true and grueling test of man and machine against themselves and the Australian outback.

I first competed with Brock in the previous year when we ran a Holden rally Gemini out of the George Shepherd rally operation in Sydney. That event (the 1978 Ready Plan Rally) ran in the desert country of north western Victoria and south-west NSW and was part of the early preparation for the 79 Repco. Brock and I learned to work together as driver and navigator, to gain each others confidence and to develop an implicit understanding of what the other meant. It paid dividends.

In ‘79 we lined up for Holden as the ‘publicity’ team joined by that great spanner man and co-driver Matt Philip, a champion rally driver of the time. Unbeknown to the other teams entered we had ‘form’. The three of us had practised for months in a spare Commodore that George had built. The ‘mule’ was used to practise mainly in the desert country we expected to see plenty of in the Repco. By the time August 1979 arrived we had it together, we could drive quickly and safe, knew how to treat the Commodore and we knew how to treat each other. Because of this and some surveying with my brother Ian, the Repco gave us no surprises and because of that plus the necessary modicum of luck, we won by the margin of some 13 minutes after two weeks and 20,000 kilometers.

I wrote this story because few readers would understand what it is like to spend 14 days inside a car with two other guys with the sole objective of winning. The 1979 event was the last event of its type we shall see in Australia. Safety, politics and environmental pressures will ensure that. Starting and finishing in Melbourne the Repco traversed Australia clockwise taking in parts of the outback seen only to a few – the Sunset country of Victoria, Maralinga and the Nullarbor plain in South Australia, Meekatharra and Chocolate Ruffle Pass in the West, Borroloola in the Territory and mining tracks in central Queensland.

The Repco attracted a who’s who of rallying including many competitors from overseas. Holden imported the legendary Raunno Aaltonen and Shekhar Mehta with their outstanding European and African experience. The third Commodore was crewed by the experienced Barry Ferguson and the fast Wayne Bell, both well navigated by Dave Boddy. Ford entered a three car Cortina team headed up by Colin Bond, a legend in Australian rallying. They also entered George Fury, a fellow Victorian, along with Australian champion Greg Carr. They were all serious rally competitors of the 70s. Peter, Matt and I ran in the top five for the first part of the Repco, reasonably content to be in the leading pack but without overdoing it. By Perth the team of Commodore 05 was working well together, had survived the ‘off’ near William Creek in South Australia and had kept the Commodore in good condition.

After Perth we knew the Repco would start to get hard. Five or six days continually on the road, limited rest and the mental challenge of knowing we were not even half way there would ensure we knew we were competing in the toughest event of its time. The day and night and day traversing the north west of Western Australia proved the biggest challenge. Some crews lost their Repco during this time. The crew of 05 not only survived, but began to move into the lead. We were in the lead group setting fastest times, many in dreadfully rough and dusty night stages. We went through the famed Chocolate Ruffle Pass well ahead of the rest and by dawn we were looking good. At Port Hedland we had taken the lead by about 25 minutes.

Then it happened, a fast left hander into a small dry creek crossing, a slight misjudgment and ‘bang’ a broken left tie rod. Remarkable as it would seem and thanks to Matt’s intimate knowledge of the car we were soon going again. As we got going again we thought just how easy it is to lose and after that decided not to be so cocky.

After a long night through the Kimberley on the Gibb River Road (a clear exaggeration to call it a road in 1979) Commodore 05 led the Repco into Darwin by a slender 3 minute margin. Not bad we thought for the ‘publicity’ team.

After Darwin through knee deep bulldust similar to the Dakar fez-fez, creeks and cattle station tracks we were hardly ever bested. We did lose the lead to our team mates Ferguson, Bell and Boddy near Mount Isa, but not for long. This was our event and we intended to win it. Except for another small ‘off’ north of Kempsey, the home of the famed Southern Cross Rally of those years, we continued to build a lead and were rewarded by driving onto the show grounds at Melbourne as the winners of the ‘79 Repco Rally, the last of the great around Australia trials.

Because Brock was tragically killed in the Targa West in 2006, I decided that readers should know something of his part in this win. Peter listed this Repco win as his greatest achievement. Better even than Sandown or Bathurst, imagine Brock saying that. Brock was a circuit racer first and foremost but his ability in a car meant he could naturally turn his hand to most things in motorsport. Brock and I parted ways soon after those years so I am not here to comment on his life. Simply to indicate that from my perspective Peter, Matt and I enjoyed a great experience together during those two weeks. Peter brought his natural affinity behind the wheel to the crew. Matt brought his mechanical expertise and his expertise as a Victorian champion rally driver. I brought my navigational skills along with an ability to keep us all pointed in the same direction. This combination is why the ‘publicity’ team won.

Readers will remember the often quoted ‘why do men climb mountains; answer, because they are there’. It is the same in long distance rallying; the 05 team did it because it was there; three of us and the Commodore and the desire to drive the next piece of rally track faster than anyone else.

Noel Richards is now retired and living in Brisbane where he was the Dean of the James Cook University Brisbane campus.

I posted an update as the 40th anniversary occurs later in 2019. I re-read the original and it still provides a sense of wonderment that such events occurred in the 60s and 70s. I also smile at various comments, many from competitors who were there and experienced the toughness of the event and many way off the mark from people who were not there and therefore can only imagine!
Noel is still in Brisbane and retired from many aspects of the previous life but still enjoys a good red wine!