Port Hedland was approximately half way around and a time to take stock. Many cars needed a lot of work on them while Shepherd also had to calm the intra-team rivalry with Brock having taken a handy 25 minute lead after Ferguson’s troubles. The afternoon included a 197 km stage which was easily cleanable then the long tiresome drive up past Broome to Derby for a dinner break and eastwards to the start of the event’s longest competitive section through the Kimberley.

It was just a few kilometres into South Hedland for fuel and to the Walkabout Hotel opposite the airport where many service crews had set up. Some decided to go into the main part of Port Hedland, about 7 km to the north, to use facilities at car dealerships, but still had to come past the Walkabout Hotel where there was a passage control and scoring. The total stage notionally allowed 1 hour service time but many crews overstayed in Hedland and then had to speed initially only the Coastal Highway and then down the 84 km of rather undulating sandy road to Shay Gap. Quite a few crews would lose time on the section including Portman, Nalder and Murray (1 minute each), Davis (3 minutes), Carr (6 minutes), Roberts (11 minutes), Mizel (14 minutes), Miettunen (17 minutes), Giddings (20 minutes), Hurrey (27 minutes), Jensen (34 minutes), Hilton (over an hour late), and many others. The other leaders were all on time.
The break in Port Hedland was crucial. With 2 hours 45 minutes to do the 186 km there was a good hour available for servicing. At least two of the MHDT Commodores got complete new rear ends. Cowan's Citroen had a complete rebuild of the rear suspension. Both Dunkerton’s and Nalder’s cars needed shockers. Shepheard would also have been calming nerves after Brock took the lead from Ferguson and Mehta was forced to stop and help Ferguson out of the sand. Many other cars would have used this as a major service break.

Starting near Shay Gap, this stage initially meandered for 25 km through undulating country across to the sandy crossing of Eel Creek where 4WDs were stationed to help later crews through. The remainder of the stage was mostly straight, albeit narrow sandy tracks presumably along the old telegraph line. Towards the end of the stage it used a section of the Kidson Track, nowadays a popular access to the Canning Stock Route. This was beautiful country, wide open grassy plains with a few undulations and clumps of trees. There were few hazards except for one very nasty washaway that was cautioned in the instructions. It was a fine and sunny afternoon with a light breeze blowing and no problems with dust. Even with the 100 km/h average it was possible to be at least 20 minutes early. The stage finished just off the main coastal highway well to the east of Port Hedland. 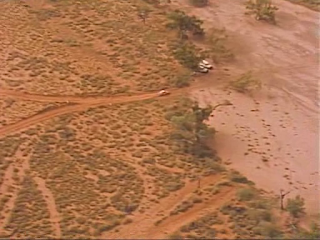 Brock went into this stage first on the road about half an hour in front of the Mehta Commodore and then Ferguson about 5 to 10 minutes further back. Then there was about a 45 minute gap back to Dunkerton, then another big gap to Barth and Portman and the interloping Koseki, another almost half an hour to Cowan then the interloping Colless followed by Loader and Nalder. The first 8 cars, plus Koseki and Colless, were now spread over about two and half hours.
Entering Eel Creek Brock caught a washaway and apparently broke a tie rod end. They had a spare but Philip took in excess of 30 minutes to carry out the repairs, by which time Mehta had probably arrived. Brock ended up dropping 22 minutes on a stage where they could have been half an hour early, and their lead suddenly shrunk to a meagre 3 minutes. There may be a little more to this story. It appears that the ball joint was badly worn but they didn't have time to change it in Port Hedland so they continued at a reduced speed. It was intended to be changed at Sandfire Roadhouse on the next transport. It surely could have been much worse because on a tighter stage they would surely have lost a further 20 minutes and the event.
Among the other leaders, the Loader/Hill Lancer had a slipping clutch after the encounter with the sandy bog and they intended to change it at Sandfire when there was potentially more time available than in Port Hedland. However it slowed them through the stage and Nalder quickly passed them at Eel Creek - they ended up dropping 15 minutes. Others also had problems that slowed them on this cleanable stage: Dunkerton and Rowney were each 3 minutes late, Jackson 6 minutes, Mizel 14 minutes, while major problems were emerging for the Mason Commodore (29 minutes late) and the Hilton Celica (46 minutes late). Stewart's clutch disintegrated soon after Eel creek and the Commodore finally retired.
Those who cleaned were Herrmann, Cowan, Mehta, Barth, Carr, Watson, Ferguson, Portman, Nalder, Davis, Taylor, Colless and Roberts. About 50 cars completed the stage. Quite a few picked up the control from the wrong direction by nipping in off the highway on their way towards Derby (or Darwin).

The previous stage emerged onto the Coastal Highway about 30 km short of the Sandfire Roadhouse, about the only sign of civilisation on this lonely stretch of road to Broome. Back in 1979 the road was all unsealed as far as the Broome turnoff, and was a mixture of gravel and sand, with quite bad corrugations in places. The road was sealed from the Broome turnoff to Derby and then 100 km of tarmac out the Gibb River Road and another 30 km of gravel to the start of the Kimberley Trial Stage at Napier Downs. The stage notionally allowed an hour in Derby for refuelling, servicing and dinner.
The first cars arrived in Derby around 7.30 pm. The place was abuzz with a big crowd (for Derby), good food on offer and plenty of stories being exchanged. The greatest concern was the appearance of many cars cutting-and-running. The organisers had promised that such cars would not be allowed to start trial stages ahead of the cars that had done the entire route and it would have been pretty easy to enforce that rule before the Kimberley stage but alas, it was not. After the 130 km run out to the start of the stage there was a fuel tanker where crews could top up for the following 516 km stage and the ensuing 50 km run into Kununurra and the next refuel.
All the leaders were on time except for Davis who was 8 minutes late and Mason, whose problems were to see the end of their run of no missed controls - they would ultimately have to skip around the Kimberley stage to Kununurra, dropping two controls. The results show about a dozen cars cutting and running to Napier Downs to start the Kimberly Trial Stage, many interspersed among the leader after booking in early to recoup late time, plus those like Colless and Koseki that had already rejoined before Port Hedland.

With Mason and Stewart dropping from the list, there were now 17 cars that had not missed a control:

Next: Derby to Darwin

Hilton’s service man, Charlie Ryder, was at the end of the trial stage to give us instruction to the Toyota dealership in town. The extra 15 km into town and back would eat into our time but we still figured on having an hour during which time the struts were changed and we took showers at the service manager’s house which was nearby. It was hot and humid so the showers we very welcome. We also got fed some lunch and I made a phone call to home. Back at the dealership Hilton had arrived and told us of the washaway he’d hit on the Mount Meharry stage and that the car was not in such good shape. Our car was in good shape and they’d even washed it. We needed to press on as there was the “scoring” passage control at the Walkabout Hotel and then we had 173 km to Shay Gap in 1.5 hours. Wes was cautious on the main highway sitting on about 125 km/h but then went full speed down the 85 km of very undulating sand road to control. I was navigating and kept track of our schedule but in the end we arrived just as the Lancer was leaving and we dropped 1 minute. I settled into the driver’s seat for the next stage as the ABC film crew were filming.
The Telephone Line stage was good fun. We set off at 2.34 pm through some nice undulating terrain with a reasonable road. The new suspension felt great! We didn’t know that the stage was so cleanable so we pushed hard early on and caught the Lancer by Eel Creek, which we had no trouble clearing, and then passed the Lancer who we later found out had a slipping clutch. The remainder of the stage was on very fast tracks that were a bit undulating but with few hazards except one large washaway that was cautioned. By the time we got to the “T.H.L.” at 139 km it was obvious we were going to be early so we just backed off. We were 15 minutes early but the Lancer had not arrived by the time we departed.
I drove up to Sandfire Roadhouse where we refuelled, and then for another 50 km or so when I handed over to Geoff and jumped in the back to get some sleep just as it was getting dark. Somewhere along the way Wes took over from Geoff and I took over from Wes about 50 km before Derby. The refuel there was buzzing and there was good food available. I called my wife in Melbourne and at about 10.30 pm we headed off towards the start of the Kimberley stage, Geoff driving and Wes asleep in the back. At the fuel tanker just before the control we chatted to the P76 crew who had cut-and-run and Peter Foden agreed that we should go out ahead of them.