Competitors departed Townsville early Wednesday evening for the division to Sydney where the first cars arrived mid Friday morning. The only break was a short stop at Brisbane's Brookside Shopping Centre. Despite the relatively small proportion of competitive distance there was nevertheless some serious competition throughout both nights. The route is shown below. 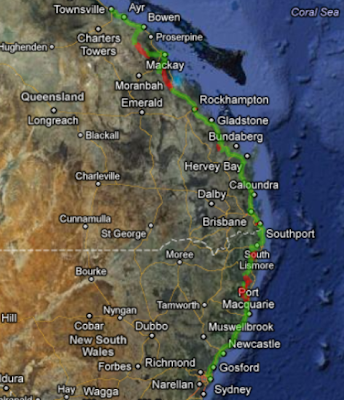 Detailed descriptions of the stages, conditions and stories are split into three parts:

With Ferguson and Brock separated by three minutes at Townsville, George Shepheard had a major dilemma on his hands. Apart from wanting to protect the amazing 1-2-3 positions, it would have occurred to him, and perhaps GM executives, that a win by Brock, then Australia's best known driver, would be a major publicity coup. According to Bell in the August 2016 issue of Rallysport Magazine there was a clandestine meeting in Townsville at which it was decided that Brock would take over the lead and that the Ferguson/Bell car would play a support role. Bell says he was not allowed to drive the car for the remainder of the event. How Brock would take the lead was not revealed but on the two pre-dawn stages between Mackay and Rockhampton, Brock passed Ferguson on the road and took a 9 minute lead. An alternative theory is that the Ferguson car was believed to have a slipping clutch and this necessitated them taking it easy. In any case, Brock sought to consolidate that lead for the remainder of the division, but slid off the road on the division's final stage before Port Macquarie, potentially throwing away the lead. Ferguson had to stop and so the time differential was minimised and Brock took a 6 minute lead into Sydney. It was not possible to accuse Brock of putting the 1-2-3 victory at risk because his times were slower than Carr's and Portman's, both of whom were flying. Carr won the division easily and cemented his fifth place, perhaps even dreaming of catching Dunkerton for fourth. But Dunkerton was also doing good times and finally had a trouble free run, making it almost impossible for Carr to catch him before Melbourne. Barth rolled the Porsche near Dorrigo and dropped over two hours, falling back behind the Loader/Hill/Neale Lancer. Portman overcooked it again, this time on the same corner as Brock, but the time losses were minimal so they managed to hold 7th ahead of the Lancer, but the Stanza was a wreck. Herrmann had a good run and moved within striking distance of the other Porsche, the Lancer and Portman, setting up a close final division tussle for seventh place. 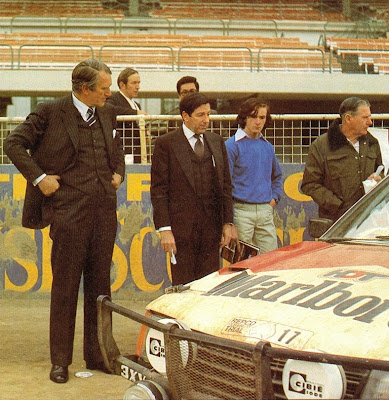 Fourteen cars had done the entire route to Sydney, with Hilton dropping out. Scores at Sydney are shown below with only Portman to drop from this group before the finish.


It is worth mentioning that these scores are rather different from the ones that were available at Sydney during the event, which sadly were so full of errors as to be almost fictional, making it very difficult for some crews to know whether to push hard or not on the final division. In particular, there was a 29 minute error at Sydney in Dunkerton's score on this division which persisted into the final published results but the arithmetic error is easy to see. The 29 minutes would not have made the difference between fourth and fifth at the end and even if the error had been known in Sydney it is unlikely that Carr could have gained a further 18 minutes on Dunkerton over the last division. On the other hand, the results at Sydney had shown Barth 14 minutes behind Herrmann as a result of the 20 minute error in Barth's score into Perth. This arguably caused Barth to back off on the final division, thinking that it was impossible to catch the other Porsche. Herrmann was shown as being just 4 minutes behind Loader, which caused Herrmann to push and in fact by Melbourne Herrmann thought he had overtaken the Lancer but a recount showed that he hadn't!

The results show 40 cars visited all controls on Division Q. Scores were as follows, bearing in mind that with a late time limit of only 5 hours, scores over that must include penalties for booking in early or for entering controls from the wrong direction. Given that Rowney, Jackson and Hurrey were never recorded as booking in early, one wonders whether they had in fact exceeded their late time!

It seems likely that Turner/Donohue/Sparrow (Leyland P76) also completed the division without missing a control but they do not appear in the results. By calculating the missing time from their final results, they must have dropped a bit more than 10 hours on the division.

There were 93 cars classified as still in the event at Sydney including Myers/Myers/Sinfield (Peugeot 504) and Turner/Donohue/Sparrow (Leyland P76) who were missing from the Division Q results, plus Carter/Stephens/Draper (XC Falcon) running under protest (they had missed 12 controls on Division Q). The 79 cars that had missed controls were as follows:

Retirements on Division Q were as follows, including Jensen who was classified at Sydney but did not start Division N: