Cars departed Perth pre-dawn on Friday morning for the long run to Darwin via Geraldton, Port Hedland, Derby and Kununurra. Short breaks were scheduled in each of those towns. The first car would not reach Darwin until late Sunday afternoon. The route is shown below. 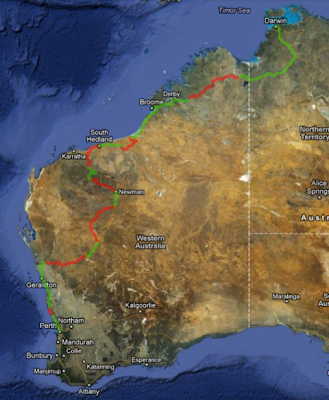 Detailed descriptions of the stages, conditions and stories are split into six parts:

The Western Australian division was where the Commodores won the event. It can even be said that it is where Brock won the event, even though Car 05 would briefly relinquish the lead to Ferguson near Mount Isa, regaining it again between Mackay and Rockhampton. In reality, the Ford effort fell apart at Perth where all three cars required substantial work. The lead car of Bond was presumably given priority and made it out of Perth on time, only to roll on a transport stage 50 km from the city. Fury just made the transport but dropped road position. Carr lost more than an hour leaving Perth, and crucially, lost road position which would be critical on later dusty sections. Fury's car then broke its engine mounts on the first trial stage and never really recovered. Carr spent the whole division languishing down the field, perhaps nursing the car and almost certainly encountering a lot of dust. Bond battled on, effectively retiring at Wittenoom while Fury skipped sections after Newman and headed straight to Darwin. Portman rolled at Wanneroo and Dunkerton had a number of mechanical issues, while Cowan's hydraulics failed before Port Hedland. The Commodores moved into a commanding 1-2-3 position by Port Hedland. George Shepheard, no doubt realising that the dream of a 1-2-3 finish was actually possible, now had to manage the intra-team rivalry between the Brock and Ferguson cars. The two stages before Port Hedland proved decisive with the Ferguson car puncturing and then becoming stuck twice, allowing Brock into a clear lead, but then a broken tie-rod on the 05 car would reduce that lead to a just 3 minutes by Darwin.

By Darwin only 17 cars had done the entire route without missing any controls. The 9 that dropped off the list since Perth (Lund, Bond, Fury, Warmbold, Johnson, McCubbin, Stewart, Roberts, Mason) had basically struck troubles before Port Hedland. Outright scores at Darwin:

* Davis' score is missing time lost on stage W10, estimated to be 15 minutes.
# Jacksons' score is shown as 20 minutes more in the results, probably an arithmetic error.

It is also of interest to look at the scores on Division W alone, where 27 cars had done the entire route. Apart from the standout performances of the two Porsches, there were also some great performances from a few crews that had previously missed controls on earlier divisions:

It is interesting to note that because the late time limit on Division W was 8 hours, those with scores over 8 hours did so by booking in early on some controls.

There were some other notable performances. Roberts/Waterson/Carrol (Commodore) missed only 1 control (Tangadee), so not doing stages W9 and W10, as did Foden/Baker/Young (Leyland P76) and O'Donnell/Geissler/Gibson (LX Torana), although both of them skipped other stages, picking up maximum penalties for entering an end control from the wrong direction.

There were 104 cars classified as still in the event at Darwin, plus Carter/Stephens/Draper (XC Falcon) running under protest (they had missed 9 controls on Division W). The 87 cars that had missed controls were as follows:

The following cars retired during Division W or at Darwin: