This was a leisurely drive through Berri and the Riverland orchards and vineyards to just west of Kingston. The day was now fine and sunny and certainly the leading crews were looking forward to an easy run into Adelaide. A handful of crews, most likely as a result of sheer exhaustion, decided to skip straight to Adelaide missing this and the subsequent three controls. 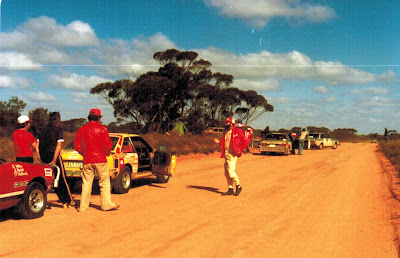 This stage using a mixture of gravel roads and sandy/rocky laneways was a fairly pointless exercise and it was obvious that no-one was going to lose much time unless they did something stupid. There were a few tricky narrow tracks with rocks and washaways but no need to be pushing hard. 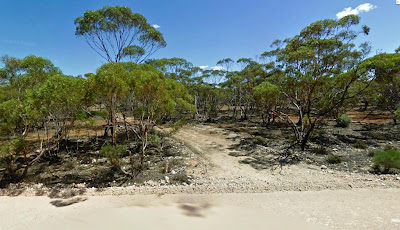 All the leading cars cleaned and in fact 41 cars lost no time. However, the stage was not without some drama. The distributor on Carr's Cortina worked loose and needed quick repairs while Dunkerton's Volvo had a problem with the diff, apparently the bolts working loose and wearing a hole in the housing. They both limped on without any loss of time on this easy stage.
Further back in the field times were slower and losses ranged from a few minutes up to a couple of hours. There were 36 cars that lost between 10 minutes and an hour, so many that it is difficult to conclude that they all had mechanical problems and perhaps they were simply exhausted and slow. Alternatively, perhaps there were a couple of sandy stretches that caused problems for later cars. The battling Murray Carter dropped more than an hour in the Falcon, while George Harris in the Citroen lost an hour and a half. The Cuthell Torana, Sparkes Fairmont and Bolton Dodge Kingsway were all very late and skipped to Adelaide. The Farmer P76 and the Stockley Porsche 911 scored maximum 4 hour penalties, presumably having major problems or having simply decided to skip to the end of the stage.

This transport ran from Murray Bridge across through Strathalbyn to the edge of the Kuitpo Forest. There was a hold at the end with the first car starting the Kuitpo Special Stage at 3.00 pm Monday afternoon. At the front, Carr needed service time to deal with the loose distributor and also a loose rear shock absorber which apparently shook the rear so badly as to pop the rear windscreen from its seal. The Cortina lost 14 minutes which dropped them from second to tenth. A number of other crews lost time on what was an easy transport, presumably needing service time, while large time losses befell the Ruyter Moke (55 minutes), the Macarther Falcon (1 hour) and the Ohta Toyota (1 hour 42 minutes). The Ellis/Wall Datsun struck trouble after their early quick times and cut directly to Adelaide. 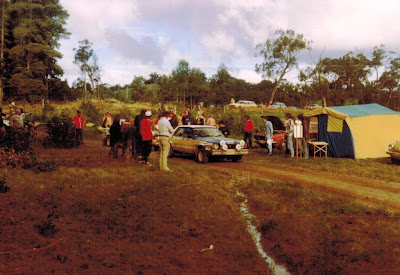 The short special stage through the Kuipto pine plantation was on reasonably good forest roads and included plenty of turns (32 instructions). It basically ran across the plantation from east to west to a turn hard right at a spectator point, then back across to the east side before heading to the finish on the west side again. Quite a few spectators were at the spectator point which also had a passage control. Conditions were reasonable although it was certainly damp and the roads may have cut up a bit for later cars. 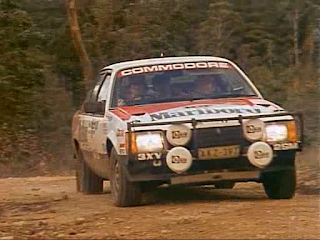 None of the leading cars had any problems although Carr was somewhat slow with the loose shocker, Dunkerton was limping through with the leaking diff in the Volvo dropping about 4 minutes more than a good time, and the Davis 180B was also quite slow. Mulligan stalled at the spectator point and was unable to restart the Escort, however the problems were more serious and they were unable to complete the stage at all. They limped into Adelaide but their rally was effectively finished. 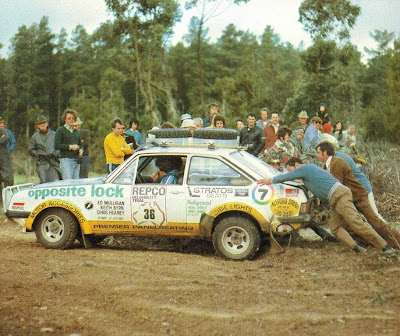 As night fell, the remainder of the tired field came through this dinky little stage which should not have presented any real challenges. Yet the times stretched out more and more as the relative inexperience of so many crews was evident. Although 108 cars completed the stage, only 79 had a time under 10 minutes which equated to an average speed of 40 km/h. Those with large time losses included the Jones Riley (45 minutes), Heaton's HJ Holden (50 minutes), the Barnes Hillman (57 minutes), the Walsh 'Grey Ghost' (1 hour 3 minutes), Pittaway's Ford Ute (1 hour 18 minutes) and Madgwick's F100 (1 hour 40 minutes).

It was obvious that this transport into the heart of Adelaide was going to be tight. The early parts were on somewhat twisty roads in the Lofty Ranges while the latter parts were mixing it with peak hour traffic. Many cars were late but in the end the organisers deleted all late penalties. Cars were scrutineered and then impounded for the overnight stop.
While the first cars arrived on time from 4.00 pm, it is worth remembering that with six hours of late running time and the original field being spread out over five and a half hours (although holds at Renmark and Kuitpo may have compressed the field somewhat) that the last cars were probably coming into Adelaide around 3 am Tuesday morning, not long before the first of the leaders were being released from impound for the division to Perth!

We were 18th car out of Renmark, Warmbold in front of us, Hilton behind. I drove the pointless trial stage to Murray Bridge, which was reasonably interesting in places apart from being easily cleanable. I managed to nose dive the Celica on one small sand dune, bending the valence panel a bit. At the end I discussed the paddock full of rocks with Archim Warmbold – he wondered why we Australians would grow them.
Geoff drove down to Kuitpo and Wes drove the quite interesting special stage doing the 17th fastest time – no point trying too hard at this stage of the event. Wes drove all the way into Adelaide and we pushed along without breaking the law, making it only by a minute or so. The local Toyota people were good to us and transported us to our accommodation. It was 5.30 pm by the time we got our rooms, dinner at 6 pm, bed by 7 pm, wake up call booked for 3.00 am. Not a bad night’s sleep really considering we wouldn’t be seeing a bed again for three days.
I'm not sure we actaully knew the offical scores before we went to sleep but we knew we would be around 15th and in fact were, so we knew we would be due out of impound around 4.30 am. Certainly when we found out we were 15th we were quite satisified with our progress from a lowly Car 81.